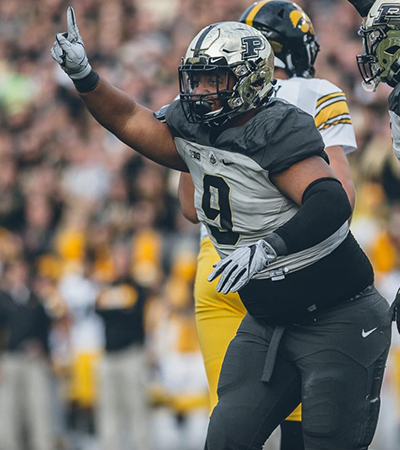 As an All-Pro fullback, Lorenzo Neal made a career out of paving the way for some of the NFL’s great runners for 16 years. Now it’s Neal’s son who is following in his footsteps.

Neal Jr. was signed after being invited to try out during the Saints’ rookie minicamp over the weekend. The team also signed linebacker Quentin Poling and offensive lineman Kyle Murphy after tryouts.

Neal Jr. (6-foot-3, 325 pounds) was an honorable mention All-Big Ten selection by the coaches in both 2018 and 2020. But his career was waylaid by a torn ACL that sidelined him for the entire 2019 season. He finished his college career with 73 tackles, 4 sacks and 4 forced fumbles in 38 games.

Neal Sr. began his career as a tailback with the Saints but was converted to fullback after an ankle injury his rookie year. He spent four seasons in New Orleans before playing for the New York Jets, Tampa Bay Buccaneers, Tennessee Titans, Cincinnati Bengals, San Diego Chargers and Baltimore Ravens.

Sport theheadlinestoday - September 29, 2021
0
Clemson fell to 2-2- this past Saturday with a loss at NC State, marking the first time the Tigers have lost two or more...