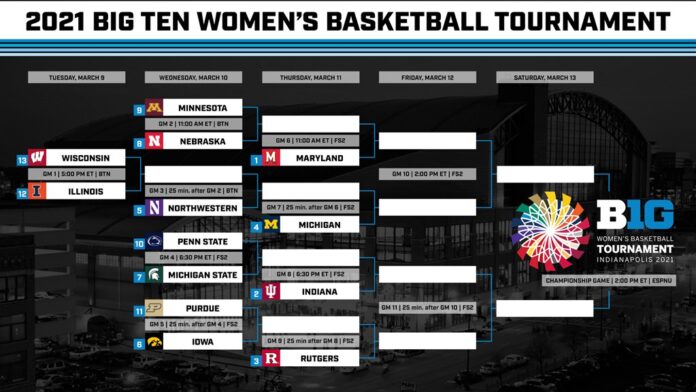 The Big Ten Conference has announced the full bracket for the 28th Big Ten Women’s Basketball Tournament that will take place March 9-13 at Bankers Life Fieldhouse in Indianapolis.

Maryland (21-2, 17-1 Big Ten) is the No. 1 seed for this year’s tournament after securing the outright Big Ten Championship, its third in a row and sixth in seven years with Saturday’s 88-61 win at home over Penn State. Along with their six conference titles, the Terrapins have won four Big Ten Tournament championships (2015, 2016, 2017, 2020) since joining the conference prior to the 2014-15 season.

Maryland will open tournament play at 11 a.m. (ET) Thursday with a quarterfinal contest against the winner of the second-round game between No. 8 seed Nebraska and No. 9 seed Minnesota.

Indiana (18-4, 16-2) is the No. 2 seed for this year’s Big Ten Tournament after the Hoosiers finished second in the conference standings, their highest placement since sharing the Big Ten title in 1982-83 and set a school record for conference wins in a season. Indiana, which advanced to the Big Ten Tournament semifinals last year for the first time since 2006, will tip off its postseason schedule at 6:30 p.m. (ET) Thursday with a tournament quarterfinal game against the winner of the second-round matchup between No. 7 seed Michigan State and 10th-seeded Penn State.

Rutgers (14-3, 10-3) earned the No. 3 seed for the Big Ten Tournament, ending the regular season on a nine-game winning streak to match the program’s highest finish (third) since joining the Big Ten in 2014-15. The Scarlet Knights will play in the last Big Ten Tournament quarterfinal against either No. 6 seed Iowa or No. 11 seed Purdue on Thursday night, 25 minutes following the completion of Indiana’s quarterfinal.

Irving fined $25,000 by NBA for cursing at fan in Cleveland

Patrick Mahomes shares conversation with Ben Roethlisberger in likely farewell: ‘He did it the right way’

Cowboys, 49ers fans rush AT&T Stadium, fall over each other before playoff game

science theheadlinestoday - January 21, 2022
0
The Washington Supreme Court has narrowly upheld an $18 million fine levied against an association of large food brands that funneled dark money into...

Sport theheadlinestoday - January 21, 2022
0
Robot umpires have been given a promotion and will be just one step from the major leagues this season. Major League Baseball is expanding its...
© 2021 The Headlines Today All Rights Reserved
MORE STORIES