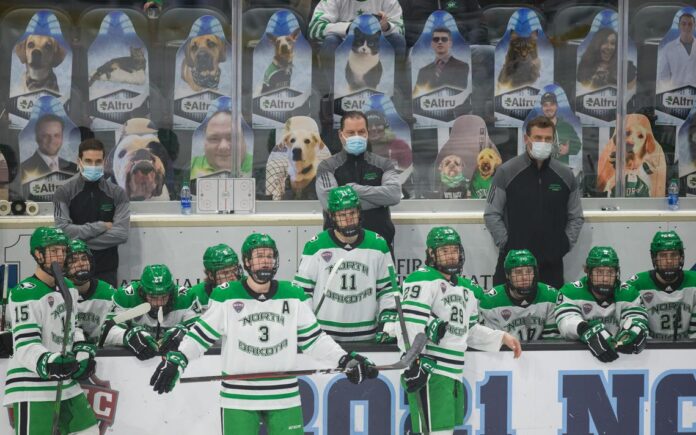 In 2019, No. 16 overall seed American International beat No. 1 St. Cloud State 2-1 in Fargo’s Scheels Arena, knocking out the tournament favorite.

In the first NCAA tournament in two years, the Fighting Hawks will be the No. 1 overall seed, and they found out Sunday that they’ll play that same American International team in the same building where the Yellow Jackets pulled off that stunner two years ago.

UND and American International will play their regional semifinal game at 8:30 p.m. Friday on ESPN3. The other matchup in the Fargo regional is No. 2 seed Michigan vs. No. 3 seed Minnesota Duluth at 3 p.m. Friday.

“Obviously, (American International) beat a strong team in St. Cloud, the No. 1 seed overall, and that will really resonate with our group here, knowing it’s a situation where 16 teams earned the right to be in the tournament,” UND coach Brad Berry said. “It’s a blank-slate approach. It’s one of those things where we’re not looking back on how they got there or what their record is. . . everyone has a blank slate. It’s a one-game shot. It’s that urgency side of it, making sure we play our game here and just concentrating on what we have to do with our job at hand.”