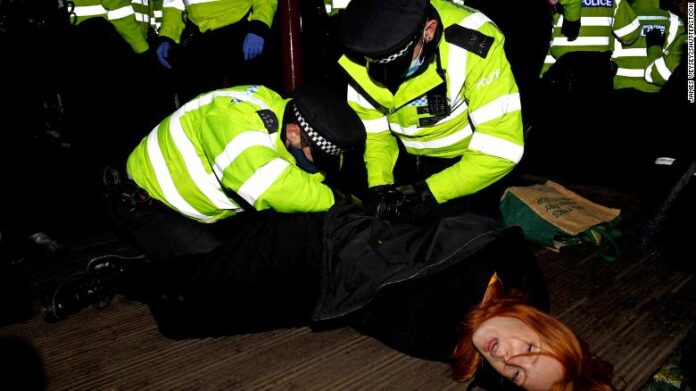 (CNN)Women’s rights activists in the UK are reeling from the Metropolitan Police’s heavy-handed approach at a Saturday night vigil for Sarah Everard, a 33-year old who was murdered while walking home in South London earlier this month.

The man who is accused of murdering her is a serving member of that same police force.
Throughout the day, mourners had flocked to the bandstand of Clapham Common, an area where Everard was last seen, in a tribute to her life. But they also came in an act of solidarity, as an acknowledgement of the shared, omnipresent experience of intimidation, violence and harassment that women constantly face in public spaces.

A series of evening vigils from organizers “Reclaim These Streets” had been planned Saturday across the UK. The main event, at Clapham Common, was cancelled after the Met said they couldn’t go ahead, citing coronavirus restrictions. The organizers asked people to shine a light on their doorstep instead for Everard and for all women affected by and lost to violence.

But by nightfall, peaceful mourners gathered for the socially distanced event in Clapham. Attendees chanted: “This is a vigil, we do not need your services.”
Less than an hour after the gathering began, officers moved in to inform people that they were breaching Covid-19 regulations and had to leave. Then, a predominantly male cluster of officers moved in, using containment and corralling techniques — where officers surround demonstrators to keep them in a particular place, making social-distancing impossible — ordering people to leave, or face arrest and fines.