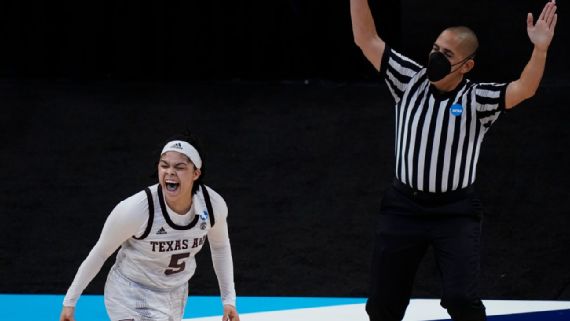 SAN ANTONIO — In the game of the NCAA women’s tournament so far, Texas A&M guard Jordan Nixon hit a running, twisting floater as the buzzer sounded to beat Iowa State in overtime, 84-82, and give the Aggies a spot in the Sweet 16.

“The only thing I thought was ‘push,'” Nixon said. “Push. Gotta go, gotta get out. As soon as I put the shot up, I knew it was going in. Honestly.

“Once I saw daylight, I didn’t think I had enough time to do anything, but my teammates ran the floor and I just had to put it up,” Nixon said. “Put it up is the only thing I thought. Live with the shot, live with the decision. I’m happy it went in.”

It capped Nixon’s career night — 35 points on 16-of-28 shooting plus 7 assists — with the sophomore coming up in one big moment after another as the second-seeded Aggies climbed out of a second-half hole.
READ MORE