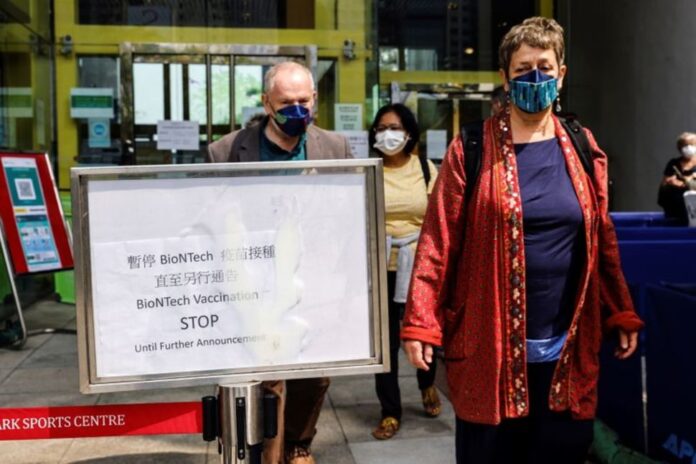 HONG KONG (Reuters) – Hong Kong authorities halted the use of a COVID-19 vaccine developed by Germany’s BioNTech on Wednesday, citing defective packaging, in a move that triggered scenes of confusion in inoculation centres across the city.

The suspension comes as the Asian financial hub has faced a sluggish take-up of vaccines due to dwindling confidence in China’s Sinovac vaccine and fears of adverse reactions.

Inoculation centre staff turned away people booked to take the BioNTech vaccine, with many Hong Kong-ers unsure as to the reason and asking for explanations. Adding to the confusion, local media reports said one doctor was reprimanded for promoting the BioNTech vaccine over Sinovac’s.

“As a precautionary measure BioNTech requested the suspension” for its vaccines in Hong Kong until an investigation is complete, the city’s Director of Health, Constance Chan, told a news conference.

The city started vaccinating residents with doses from Sinovac in February and began offering the one developed by BioNTech, in March.

The BioNTech vaccine is distributed in Hong Kong and Macau via a partnership with China’s Fosun Pharma, while BioNTech partners with Pfizer in markets outside greater China.

The BioNTech vaccine has shown greater take-up since its launch. Over the past week, more than double the number of people have booked the BioNTech shot compared to Sinovac, according to government figures. Chan said the government had initially contacted Fosun Industrial (Hong Kong), the distributor, after it found some cases of cracks in vaccine containers and stains on some bottles.