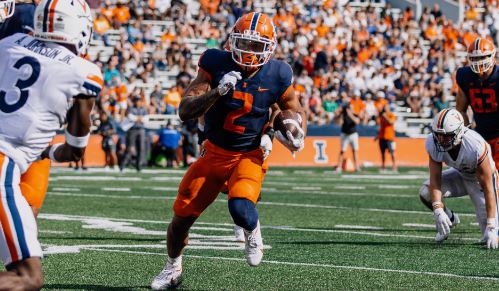 Brown on Wednesday was named Second Team All-Big Ten. Brown is also one of three finalists for the Doak Walker Award. Michigan running back Blake Corum and Minnesota running back Mohamed Ibrahim were named First Team All-Big Ten. Offensive tackle Alex Palczewski and center Alex Pihlstrom were also named Second Team All-Big Ten. Left guard Isaiah Adams was named Third Team All-Big Ten by the media and honorable mention by coaches.
Brown is second in the nation and first in the power five in rushing yards with 1,643 and is second in the nation in rushes of 10 or more yards (48). He’s second in the nation with 10 games of 100 or more rushing yards and third in the nation in all-purpose yards (1,883) without return duties. Brown was the workhorse of a much-improved Illinois offense under first-year offensive coordinator Barry Lunney Jr.
“I told him this at the end of the game the other day how appreciative we all are — and I am, in particular, as the leader of the offense — of his consistency,” Lunney said last week. “It’s always a great joy as a coach when one of your better players or your best player when your guys who are your dudes, and the way Chase has played, it’s always a joy when not only are they your better players but they’re your best people too. He’s a phenomenal young man and leader. I’m not saying he’s a better person than any guys we have on our offense but the fact that he does what he does and carries himself the way he carries himself on a daily basis just speaks volumes about the type of person he is. He’s meant obviously an awful lot to our football team. To have somebody consistently break tackles and run and be gritty and protect the quarterback and do anything he can do to help us win the game.”
Brown needs just 55 rushing yards in the Illini’s bowl game to become the program’s single-season rushing record holder. He trails Rashard Mendenhall (1,681) and Mikel LeShoure (1,697).
Brown, who transferred after one season at Western Michigan in 2019, also has the second-most career rushing yards (3,206 yards) for an Illinois running back behind only Holcombe (4,105 yards).
Palczewski had the third-best offensive grade among all Illini players to play at least 100 snaps, per Pro Football Focus. He is one of four Big Ten offensive tackles to play a minimum of 200 snaps and not allow a sack during the 2022 regular season. He was a Second Team All-Big Ten selection by the media and Third Team All-Big Ten selection by coaches.