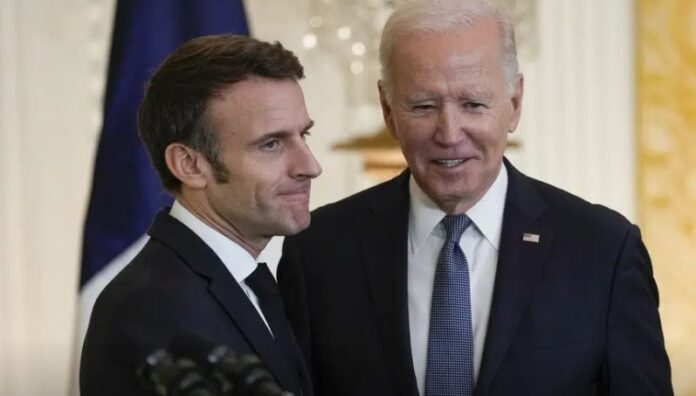 Presidents Joe Biden and Emmanuel Macron vowed to maintain a united front against Russia on Thursday amid growing worries about waning support for Ukraine’s war effort in the U.S. and Europe. Biden also signaled he might be willing to tweak aspects of his signature climate legislation that have raised concerns with France and other European allies.
Biden was honoring Macron with a grand state dinner Thursday evening — the first of the U.S. president’s COVID-19 shadowed presidency for a foreign leader. But following up on Biden’s upbeat comments might not go as smoothly as that fancy affair. Republicans who are about to take control of the House have shown less willingness than Biden to spend billions on Ukraine, and Democratic lawmakers said Thursday they were not about to jump back into the climate legislation.
In fact, for all the positive statements, Macron’s visit to Washington has been tempered by his criticism of Biden’s Inflation Reduction Act and the challenges both leaders face amid the mounting costs of keeping military and economic aid flowing to Kyiv with no end in sight for the Russian invasion.
Despite the differences, Biden and Macron sought to underscore that the U.S.-France alliance remains solid and that the West must hold steadfast against Russian President Vladimir Putin’s war in Ukraine.
“Today, we reaffirm that, as I said, we’re going to stand together against this brutality,” Biden said. “Putin thinks that he can crush the will of all those who oppose his imperial ambitions by attacking civilian infrastructure in Ukraine, choking off energy to Europe to drive up prices, exacerbating the food crisis. That’s hurting very vulnerable people not just in Ukraine but around the world and he’s not going to succeed.”